We have all run into a need or a desire to clean up old stale files from the file system, whether it be to remove old backup files or flat files that are created from one process or another.  And based on this need/desire, we have all come up with a method to help with achieve that goal.

We have all run into a need or a desire to clean up old stale files from the file system, whether it be to remove old backup files or flat files that are created from one process or 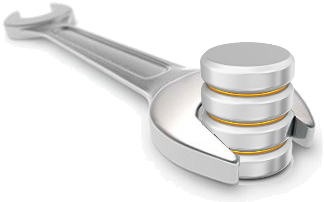 another.  And based on this need/desire, we have all come up with a method to help with achieve that goal.

Some of the methods might be to include a flag in a maintenance plan that may be used.  Other methods may be to use a SQL script employing xp_cmdshell and delete statements.  Yet another may utilize the sp_oa stored procs and DMO.  And still others may have ventured into powershell to accomplish the same task.  The point is, there are many methods.

I am adding yet another method to the mix.  Why?  I didn’t much like the option of using the sp_oa method or the xp_cmdshell route.  I am very novice with powershell and it would take a lot more tinkering to get the script working properly.  Also, I felt pretty comfortable with SSIS and had approval to try and get this done using that method.  And just because I am a novice with powershell, does not mean that I will not circle back around to try and accomplish this task via that means.

Note: This article was originally written in 2011 and got stuck in an unpublished state. Things have changed since then so i will definitely be circling back around for a powershell version.

The method employed needs to be able to do the following:

The solution I chose utilizes SSIS.  It also requires that there be a table in a database that helps to drive the package.

The filepath column holds the FileSystem Path for each directory that needs to be cleaned.  Paths that are supported are local (e.g. C:\temp ) and unc paths (\\machine\c$\temp).  I set this attribute to a length of 256, but if you have a longer path, you will want to adjust the length.

The Process column will hold a value describing what that path relates to, such as MaintainDirectory.  In my example, I am using MaintainDirectory to control which directories hold files that potentially need to be deleted.

Here is an example of the contents of that table I am using currently.

The last piece of the setup before we start working on the SSIS package is the need for a string splitting function.  Pick the string splitter of your liking.  I have one that I like and am sure you have one that you prefer.  The SSIS package relies on the return field from the splitter being named “Item.”  If it is named something else, please make the adjustments in the package as necessary.

The package I created has been created in SSIS 2008.  To meet the requirements already set forth, I utilized the following objects: ADO.Net Data Source, 2 Execute SQL Tasks, 2 ForEach Loop Containers, a Script Task, and 8 variables.  Let’s take a look at these starting with the variables.

The two Execute SQL Tasks are simple in function.  One is to get the list of directories to maintain from the FilePaths table.  The other is strictly to split the string for the FileExtensionList variable.

The first is named “Get Directory List” and should receive the Full Result Set from the following query.

The Result Set tab of this task also needs to be modified.  it should look like this.

From this task, we flow to the next Execute SQL Task named “Split FileList.”  The setup of this task is very much like the previous task.  We want to receive the full result set.  We have a configuration to make on the result set tab.  We also need to map a parameter.  Let’s take a look at those real quick.

And this is the query that we will be executing.

Notice that the Parameter we named in the Parameter Mapping tab is being used in the function call.  I chose this method because I could see and understand how it works better.

The next stop in the flow is the ForEach Loop – Directory object.  As the name implies, this ForEach Loop is designed to work with the obj_ListOfDirectories variable/array.

On the Collection tab, we need to set the Enumerator option to “ForEach ADO Enumerator.”  Then we need to select the obj_ListOfDirectories from the drop down labeled “ADO Source Object Variable.”  Your screen should look like the following image. 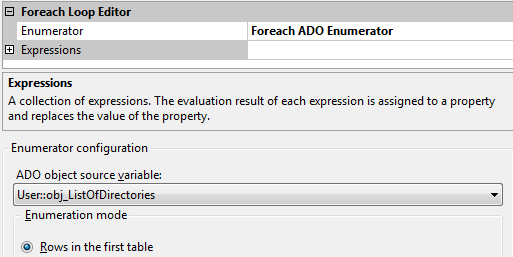 With this tab configured, we can focus our attention to the quick changes that need to be made on the Variable Mappings tab.  On this tab, we are telling the enumerator how to handle the data from the object variable.  We are mapping columns from the result set to variables for further consumption.  When configured, it should look like the following.

The collection tab follows the same configuration setup.  The difference of course being that this container will use the obj_FileExtension object from the source variable dropdown menu.

It is via the script task that we actually get to start deleting files.  This was the most difficult piece of the entire package – though the script is not very large.

For the script task, I chose to implement it via the Visual Basic option (instead of C#).  I have three ReadOnlyVariables employed by the script.  Those variables are: User::DaysToKeep,User::DirectoryToMaintain, and User::FileExtension.

Once you have set those on the script tab, the next step is to click the Edit Script… button where we need to place the following script.

An important note of interest is the need for the Try…Catch.  Without this block as it is, you could run into an issue where the file (such as those pesky temp files) may be in use by some process and cause the package to error.  The Try…catch will move past that nasty error and delete the files that it can.

Inside this script, you will see that I am comparing the LastWriteTime to the PurgeDays and ensuring that the file extension matches one that is in the list.  Then we move into the try…catch and either delete the file that matches those criteria or throw an exception and move on to the next file.

When all is said and done, your package should look something like this. 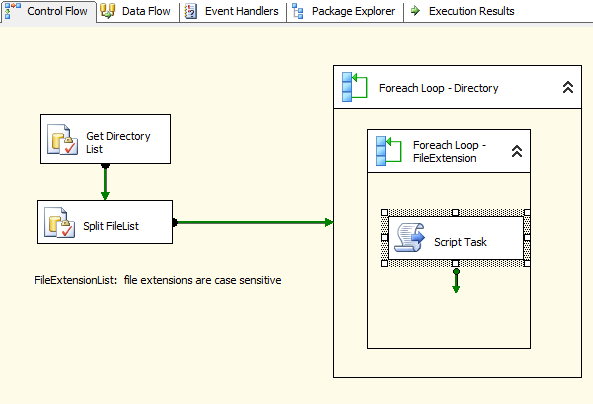 Each variable that is not an Object has a value assigned to it at this point.  These values will be overwritten where applicable.

Having this package is a good start.  But unless you are prepared to manually run this on a daily basis, it needs to be added to a job and scheduled.  There are two ways to go about scheduling this package.

The alternative option is pass the values through the job to overwrite those variables as the job runs.  Should you need to remove or add a file extension, it would just be done at the job definition level.

Let’s take a look at this second option.  I will skip past how to create the job as an SSIS job in SQL Server and we will look directly how to modify those variables from the job properties.

To configure these variables directly from the SQL Agent job, open the Job properties and click on the Set Values tab (assuming you have defined this job as an SSIS Job type).  You should get a screen similar to this (void of the set values shown in the pic).  Just add the parameters (variables) we have discussed to this point with appropriate values to fit your needs/environment. 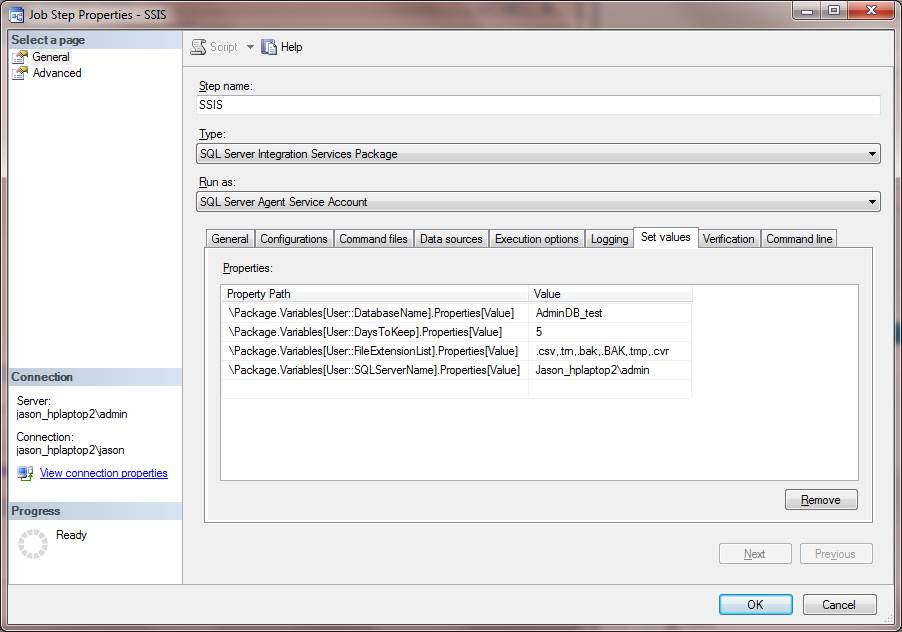 I have chosen to only include the four variables shown above since the remaining variables are either objects or get overwritten in the ForEach loops during processing.  The only thing remaining now is to set the schedule for the job.  Once set, the job (and package) will take care of the rest.

I have now shown you how to maintain some of the directories on your system through the use of SSIS and SQL server.  There are many methods to accomplish this goal, it is up to each of us to choose the best method for our environment and comfort level (by means of supporting the chosen solution).

If you would like to read more interesting stuff concerning SSIS, you might want to check any of these articles: lost password, expected range errors, and synonyms extending SSIS.

One thought on “File Maintenance – Cleaning Up Old Files”