Azure Data Studio (ADS) is getting all sorts of love and attention these days. So much so that they have finally gotten around to adding Extended Events (XE) to the tool – sort of. Now we have the power to run traces on SQL Server via ADS. 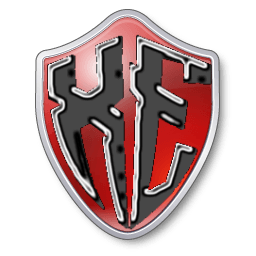 Azure Data Studio (ADS) is getting all sorts of love and attention these days. So much so that they have finally gotten around to adding Extended Events (XE) to the tool – sort of. Now we have the power to run traces on SQL Server via ADS.

The presence of XE in ADS comes via an extension and comes with a few other caveats. I will explore the extension for XE available in ADS in this article and discuss some of the caveats. As you read the article, it might be helpful to go ahead and download ADS if you do not already have it.

Roughly 10 years ago Microsoft felt it necessary to introduce a cool tool called Extended Events. Soon after they decided deprecate the features called “Profiler” and “Trace”. Unfortunately the page with the deprecation announcement is no longer available, but some evidence of how long it has been deprecated is available here. 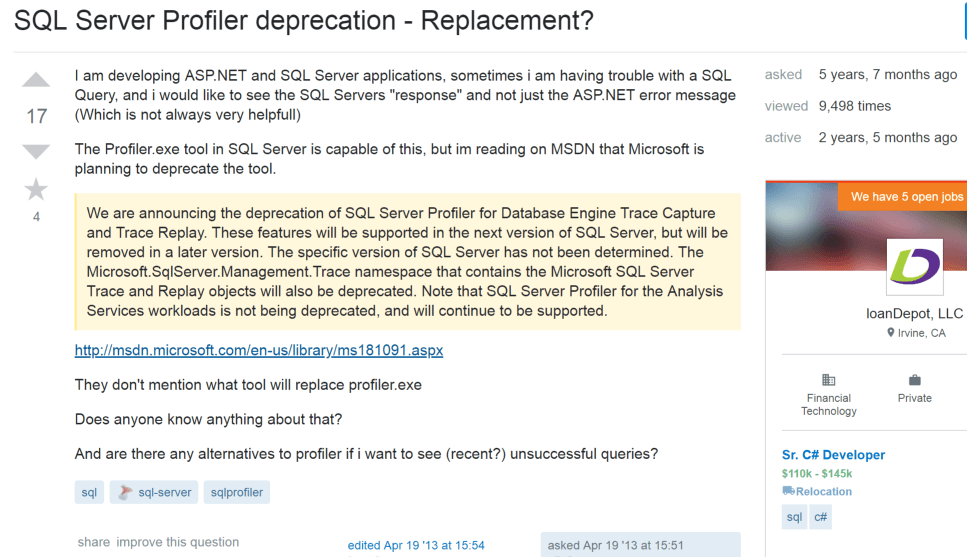 The deprecation announcement remains in effect (and online) for all versions since SQL Server 2012. It just may be difficult to find the 2012 announcement as we roll into newer releases of SQL Server.

Now, we have XE Profiler (or XEvent profiler depending on your release of SSMS – read more here). Profiler is deprecated and now we have some confusion in SSMS as to what is Profiler since we are now using that term with the “XE Profiler” feature.

Now enter ADS. XE is not included with ADS by default. You have to install an extension to gain access to the feature. So, the first thing you will need to do is visit the extensions node and then search for “SQL Server Profiler”. I can hear you right now. It isn’t even using any part of the real feature name anymore – they are just calling it the same exact thing as the deprecated feature. 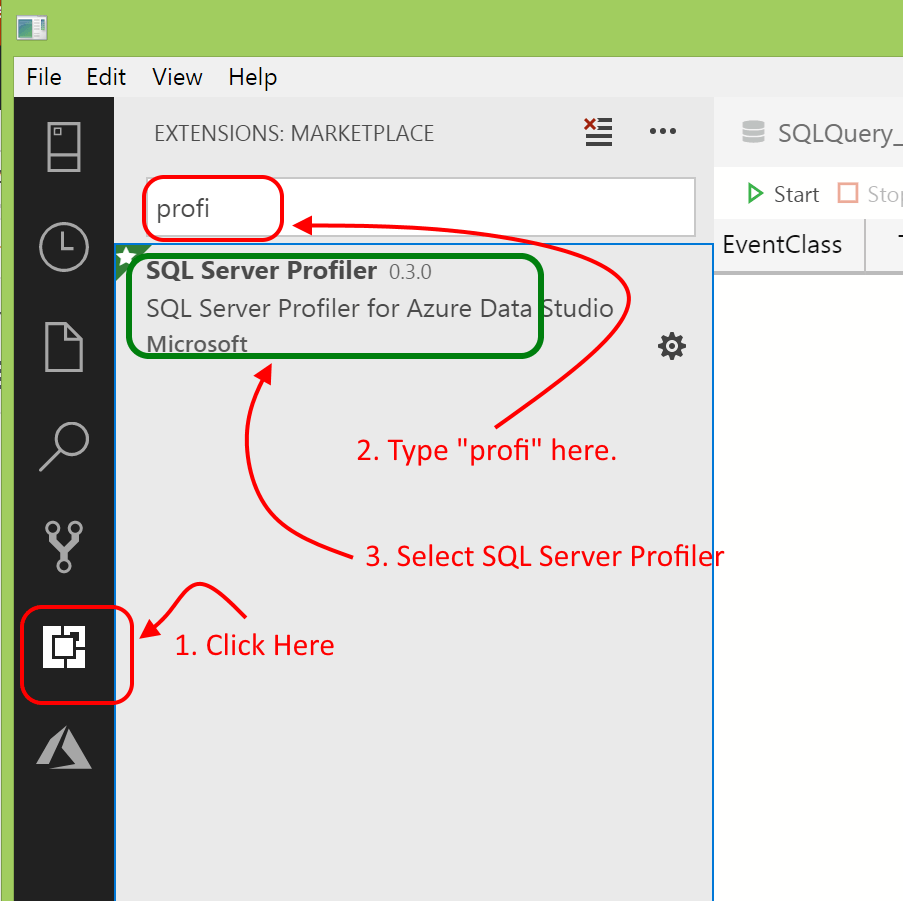 And yes, my heart breaks a little more every time I see “SQL Server Profiler”. We have been teaching Database Professionals for years to use Extended Events and not SQL Server Profiler. And they have been adopting that change in rather large numbers. This just seems like it will cause so much more confusion. Nevertheless, once you have selected the extension, look to the right hand side and you will see a screen similar to this.

After installing the extension and the reloading ADS we are ready to start using this extension. For the remainder of this article, I will just refer to it as “XE extension”.

Where did it go?

After the reload of ADS, finding the XE extension is not really that easy. If you read the info page where you clicked install, there is some info there on how to access it. In short, on a Windows machine Alt-P will be your friend. Where you use that key combination is not your friend though. If you are in a script for instance and hit that key combo, no connection will be made to your server – even if your script is connected.

In addition to that not-so-obvious message, there is a more obvious message box that pops up in the bottom right corner letting you know a connection could not be established. Unfortunately, the problem can’t be resolved from this screen. Just close the tab and try again from the instance connection as shown here. 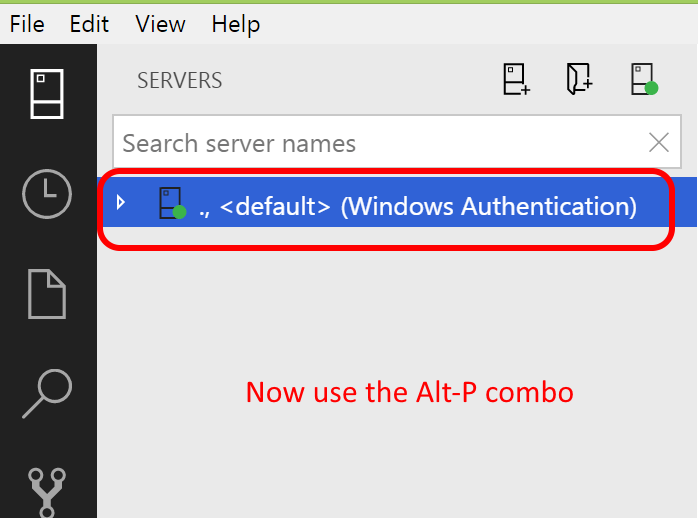 While a bit annoying, I can manage with that little caveat – just as long as I remember between uses what I did. After the XE extension is open, you should see a screen similar to the following. 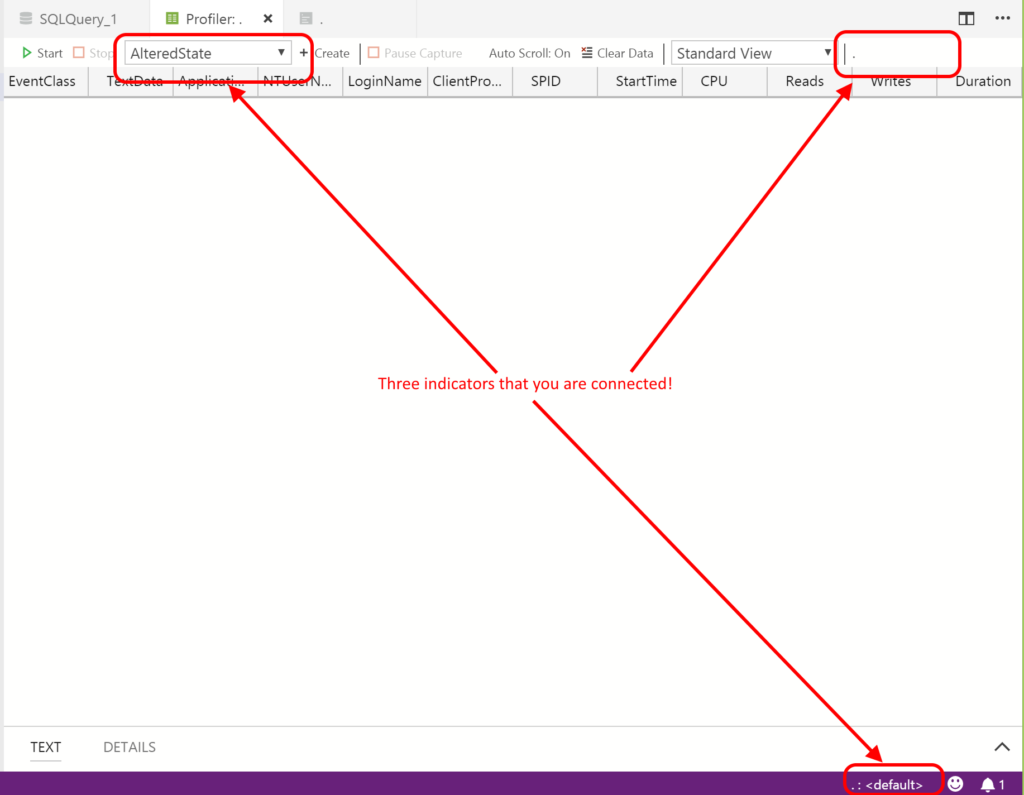 In the preceding picture, I show three indicators of a connection being established. The top right corner in the example is difficult to tell that there is a server name there but it is. In my example I am just using the shorthand notation to connect to my server or “.” (a dot) which connects me to the localhost instance.

The top left indicator is a drop down list of all XE sessions I have on the server. 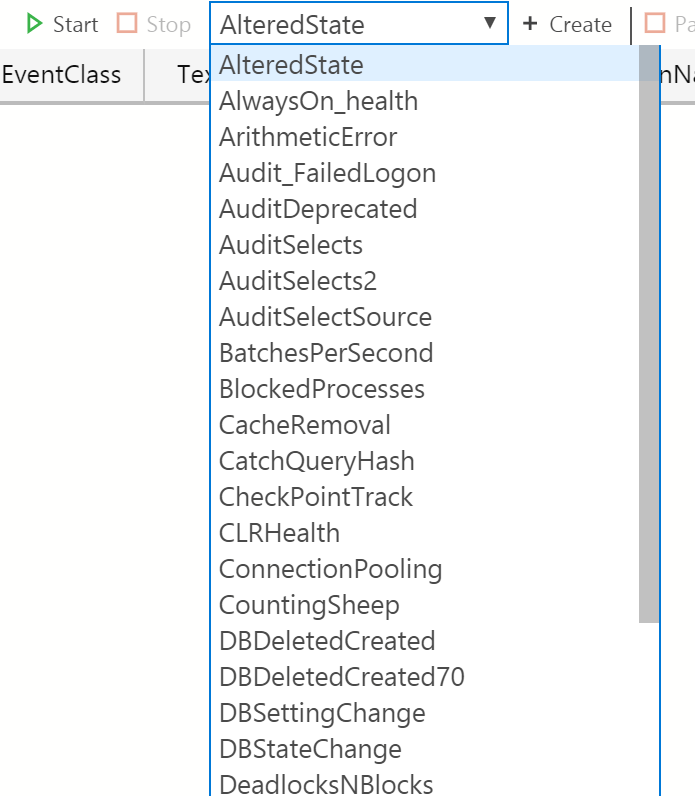 Beyond that, I don’t find it terribly useful. I can’t edit a session or script it from this tool yet.

Managing a session doesn’t appear to be possible at this point, so let’s try to create a new session and see what happens. 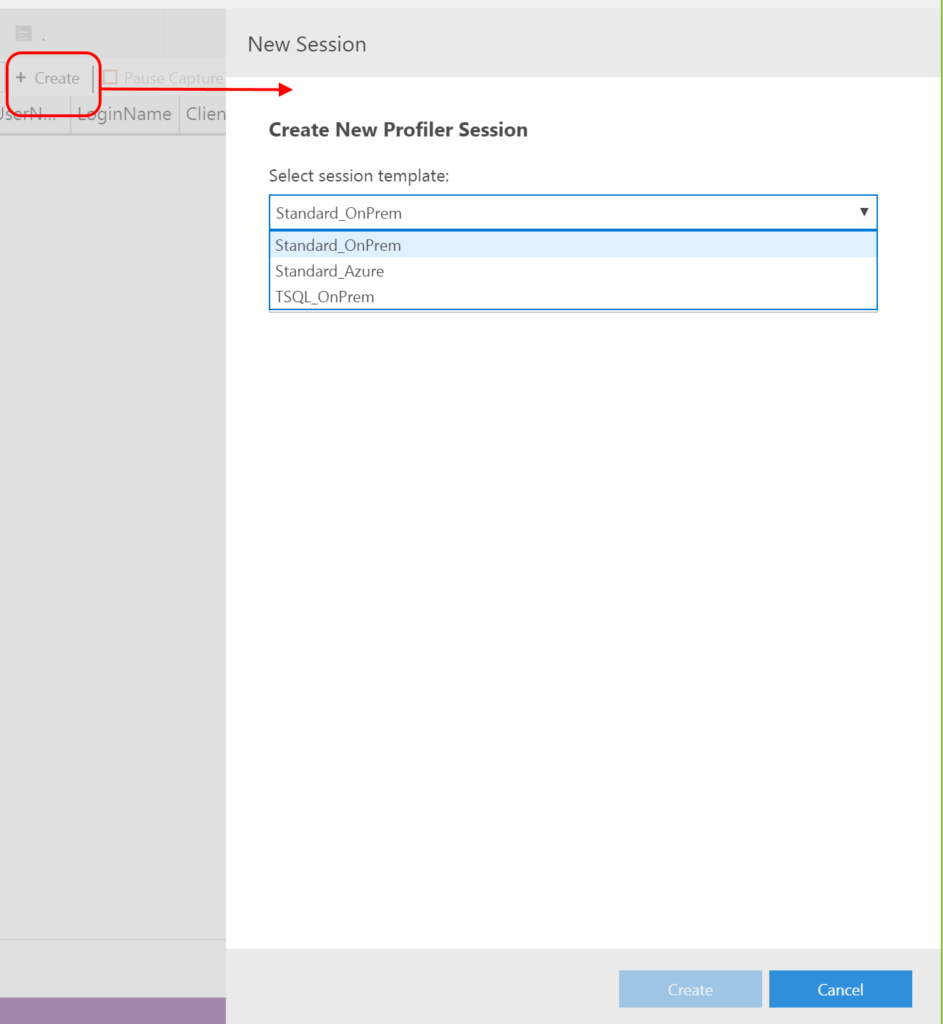 Sweet! The create session does something useful. I can create a new session. Unfortunately, all I can do is use one of three templates similar to the XE Profiler tool in SSMS. The full feature XE GUI tool has a much more complete list of templates and possibilities ever since SQL Server 2012. I documented that in this article.

Unfortunately, I have no use for the three default templates. So, for me, this tool drives me back to needing to use TSQL to create my sessions if I want to use ADS. Here is the big takeaway from that statement. The use of TSQL has been the biggest detractor for most Data Professionals when using XE. They want a full featured GUI. So, you are using ADS and must create an XE session, you will need to pull out your TSQL skills and probably need to pull down some of my helper scripts to get you going. The alternative would be to use SSMS where there is a full featured GUI that is more powerful than you might think.

There surely will continue to be more development around this idea of an XE style profiler. More development generally means that the product will mature and get better over time. This article shows how there is more being added to the feature to try and give you better control over the tool. We love control so the addition of these options is actually a good thing. Is it enough to sway me away from using the already established, more mature, and high performing tools that have been there for several generations? Nope! I will continue to use TSQL and the GUI tools available for XE that predated the XEvent Profiler.

Some say that data professionals really want the “Profiler” tool. In my opinion, that is certainly not the majority and now calling XE by the name “Profiler” is going to cause confusion at the least. Some say that maybe this tool needs to integrate a way to shred XML faster. To that, I say there are methods already available for that such as Powershell, the live data viewer, the Target Data viewer, or even my tools I have provided in the 60 day series.