Losing access to a SQL instance is never a desirable situation – for the DBA. When the people that are supposed to have access, lose that access, all hope is not lost. There are plenty of methods available to regain the requisite access to manage the server. Today, I shared one such method that I view as being extremely easy. If you lose access, I would recommend taking the steps shown in this article to regain that access.

As a data professional can you recall the last time you needed to support a SQL Server instance for which you had no access? What if you used to have access and then that access magically disappeared?

I know I run into this dilemma more than I would probably like to. It is rather annoying to be under a crunch to rapidly provide support only to discover you are stuck and have to wait on somebody else who hopefully has access.

It’s one thing to not have access in the first place. This is usually an easy fix in most cases. The really unpleasant access issue is the one when you have confirmed prior access to the instance and then to be completely locked out. More succinctly, you have lost that SQL access!

All hope is now lost right? OK, that isn’t entirely true. Or is it? What if everybody else from the team is also locked out and there is no known sysadmin account. In essence everybody is locked out from managing the instance and now you have a real crisis, right? Well, not so fast. You can still get back in to the instance with sysadmin access. It should be no real secret that you could always restart the SQL instance in single-user mode. Then again, that probably means bigger problems if the server is a production server and is still servicing application requests just fine.

If you really cannot cause a service disruption to bounce the server into single-user mode, my friend Argenis Fernandez (b | t) has this pretty nifty trick that could help you. Truth be told, I have tested that method (even on SQLExpress) several times and it is a real gem. Is this the only alternative?

Beyond the requirement of having local access to the server, one of the things that may cause heartburn for some is the method of editing the registry as suggested by Argenis. Modifying the registry (in this case) is not actually terribly complex but it is another one of those changes  that must be put back the way it was. What if there was another way?

As luck would have it, there is an alternative (else there wouldn’t be this article). It just so happens, this alternative is slightly less involved (in my opinion). Let’s start with a server where I don’t have SQL access (beyond public) but I do have Windows access. 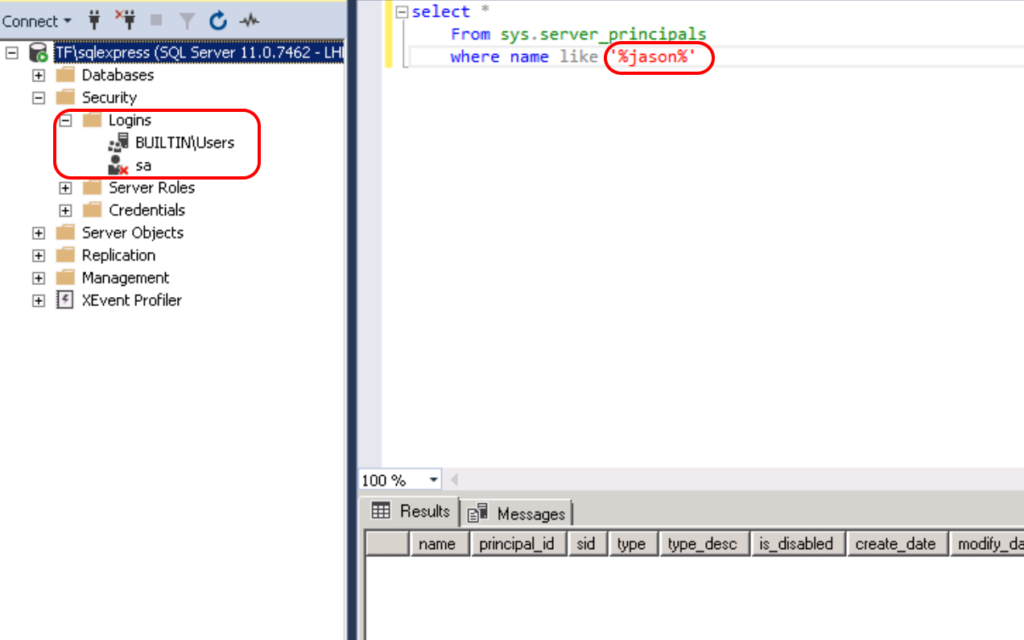 We can see on this SQLExpress instance on the TF server that my “Jason” does not exist. Since I don’t have access, I can’t add my own account either. Time to fix that. In order to fix it, I am going to create Scheduled task in Windows that will run a SQLCMD script from my C:\Database folder. The folder can be anywhere, but I generally have one with scripts and such somewhere on each server that I can quickly access. 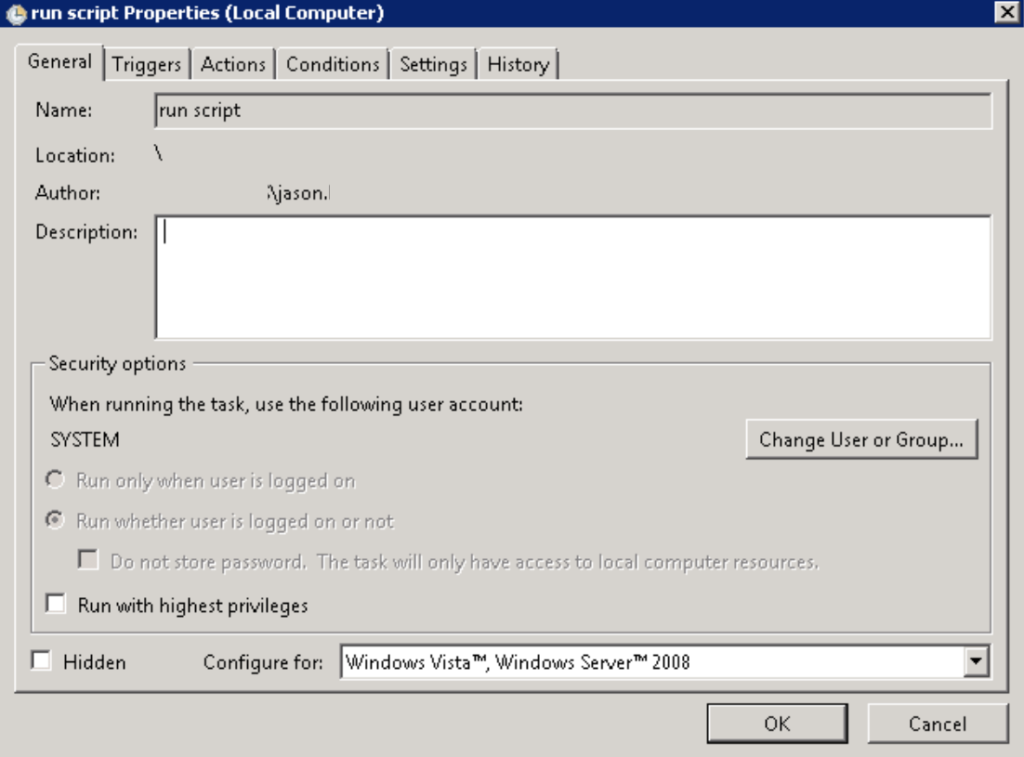 From here, you will want to click on the “Change User or Group” button to change it to an account that does have access to SQL Server. The account that I use is not a “user” account but rather it is a “system” account called “NT AUTHORITY\SYSTEM” that is present all the way through SQL Server 2017. 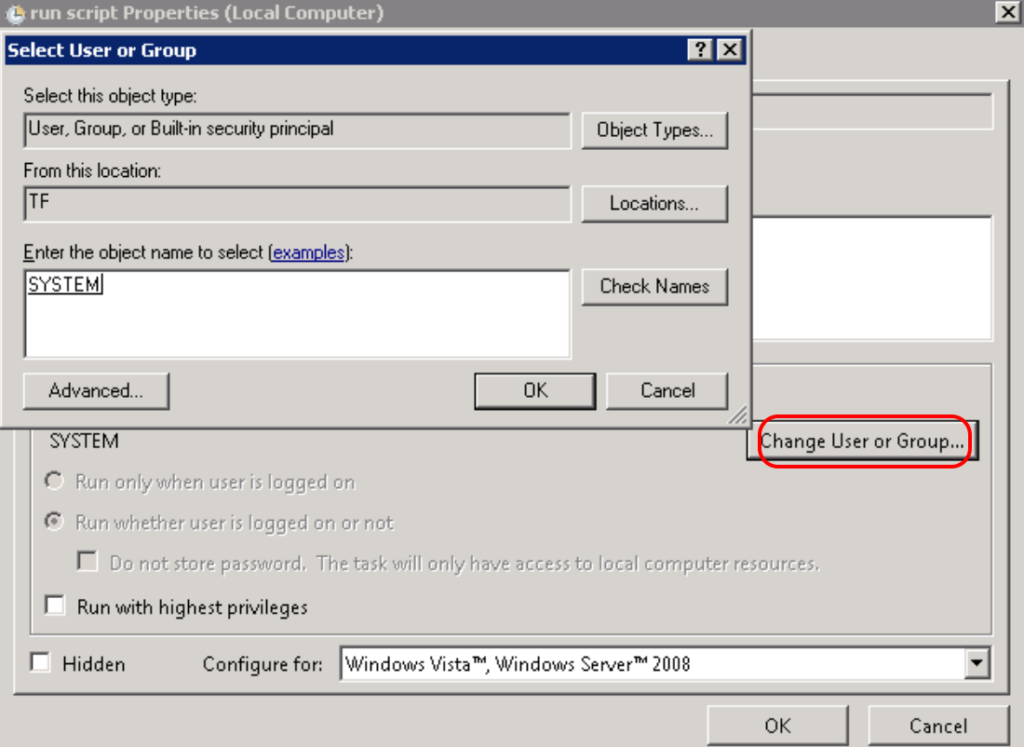 To locate the “NT AUTHORITY\SYSTEM” account, just type “SYSTEM” into the new window and click “Check Names”. The account will resolve and then you can click OK out of the “Select User or Group” window.

With the account selected that will run this task, we can now focus our attention on the guts of the task. We will now go to the “Actions” tab. 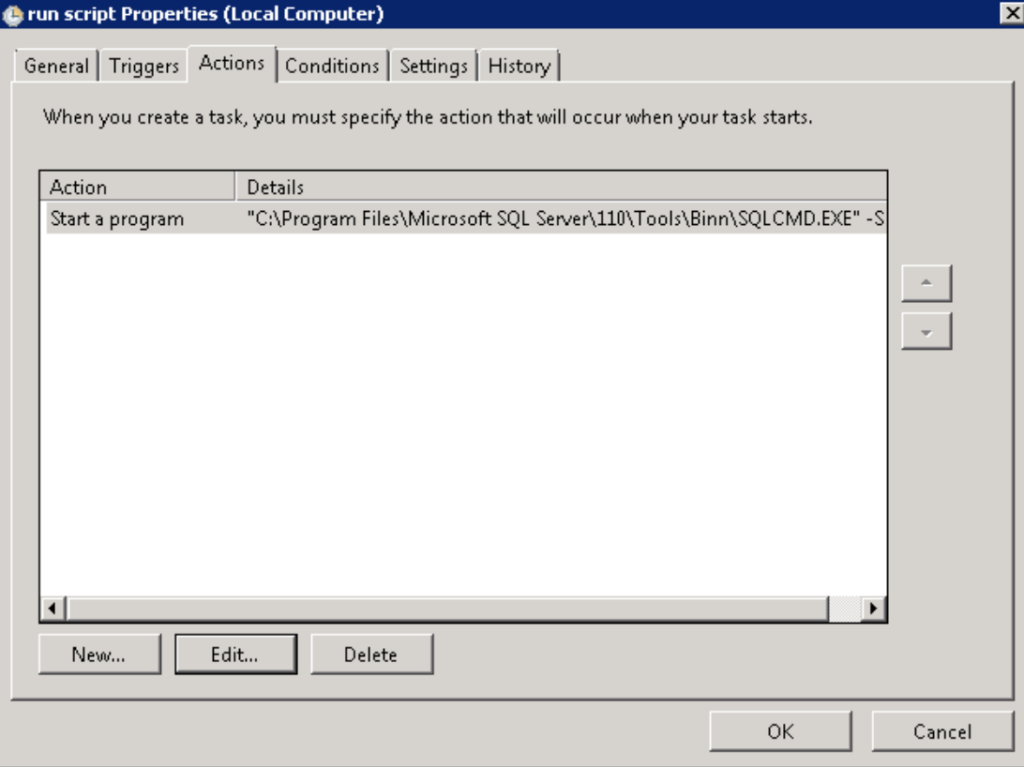 Click the new button, and here we will configure what will be done. 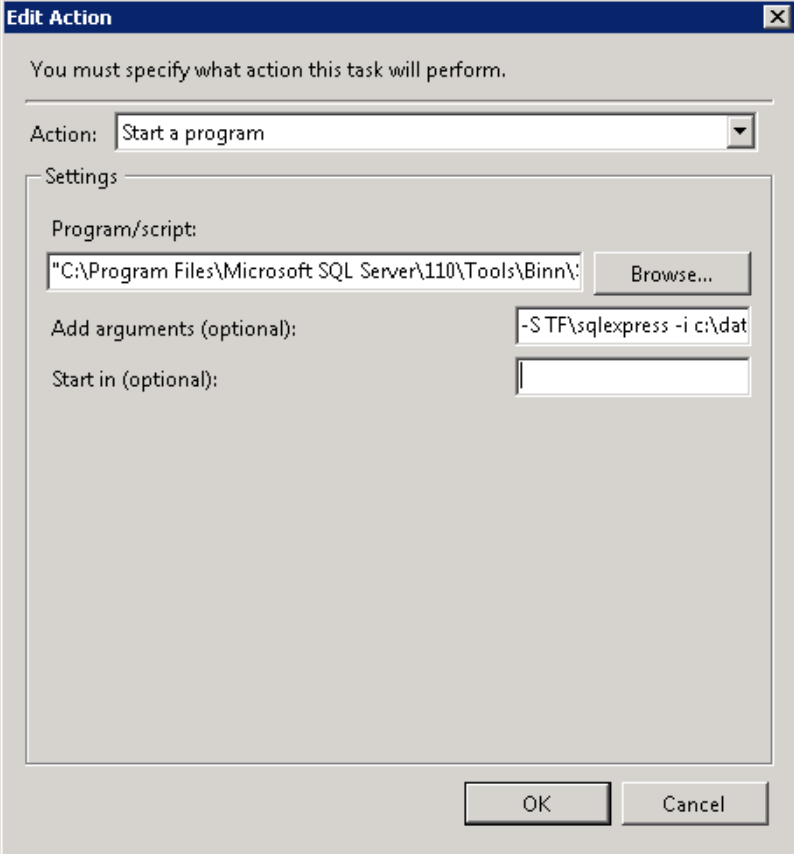 I do recommend putting the full path to SQLCMD into “Program/Script” box. Once entered, you will add the following to the parameter box.

If you do not have an instance, then just the server name will suffice after the -S parameter. The -i parameter specifies the path to the SQL script file that will be created and placed in the C:\database directory (or whichever directory you have chosen).

That is it for the setup of the task. Now let’s look at the guts of the script file.

Save that into a script document named myscript.sql in the aforementioned directory and then execute the windows task. After executing the Windows task, it is time to verify if it worked or not. 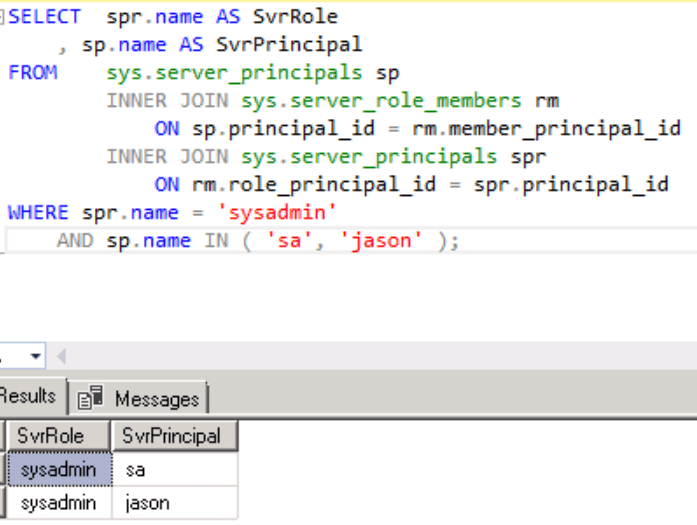 Boom! From no access to a sysadmin in a matter of seconds. Here is that quick verify script – generalized.

Losing access to a SQL instance is never a desirable situation – for the DBA. When the people that are supposed to have access, lose that access, all hope is not lost. There are plenty of methods available to regain the requisite access to manage the server. Today, I shared one such method that I view as being extremely easy. If you lose access, I would recommend taking the steps shown in this article to regain that access.

While not in the back to basics series, I do recommend checking out my other posts in that series. Some topics in the series include (but are not limited to): Backups, backup history and user logins. I would also recommend reading this audit article. If you are able to elevate your permissions, then obviously anybody with server access can elevate their permissions too. For that reason, you should regularly audit the permissions and principals in SQL Server.