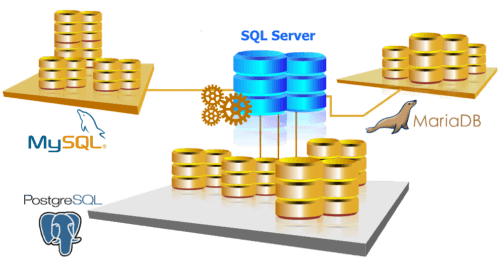 If you were unaware of this, consider this as your notice that Microsoft has indeed hastened the patch cycle. Not only has the patch cycle become more rapid, the idea of Service Packs is more or less a notion of history at this point. Critical Updates (or CUs) is the new norm. This is a pretty good thing due in large part to the rapid improvements that can be made to the product due to Azure.

With all of this considered now, there is some really awesome news. A hint to this awesome news is in the preceding image and title of this post. In a recent CU for SQL Server 2017, Availability Groups and Extended Events both have seen massive upgrades. The upgrades are so big in fact that it is mind blowing. These upgrades were no small feat by any means and it took some major investment and cooperation from the likes of some well known competitors.

Upgrade the first: Availability Groups have now been extended to be able to include nodes from MySQL, PostGres and MariaDB. Frankly, I don’t understand the MariaDB move there but it’s all good. I am 100% on board with the MySQL addition and may have to work really hard to find a use case to include PostGres.

Imagine the realm of possibility this change brings!! First we got SQL Server on Linux and now we can include a predominantly Linux flavored DBMS in a SQL Server High Availability solution. LAMP engineers have got to be losing their gourds right about now over this. Microsoft is taking away every anti-MS premise that has been used in recent years and turning the world on its ears to become more global and reachable in the architecture and DBMS world.

Upgrade the second: In order to help support and troubleshoot AGs on these other platforms, we need some tools. The tools of choice happen to be in the form of Extended Events. While there is nothing quite yet in place on these other platforms to properly monitor an AG, XE is able to capture some MySQL, PostGres and MariaDB information as transmitted across the wire when these platforms are added to an AG. How COOL is that?

If you are really chomping at the bit, I recommend procuring the latest CU that was recently released. You can find that CU from this Microsoft site here.

I am in full support of this new direction from Microsoft. Partnering with other large platforms to provide a supremely improved overall product is very next level type of stuff and frankly quite unheard of in this ultra competitive world. It is so unheard of in fact that this was a nicely crafted April Fools joke. Happy April Fools Day!

Having mentioned Extended Events, if you are interested, I do recommend a serious read from any number of articles posted in 60 day series.