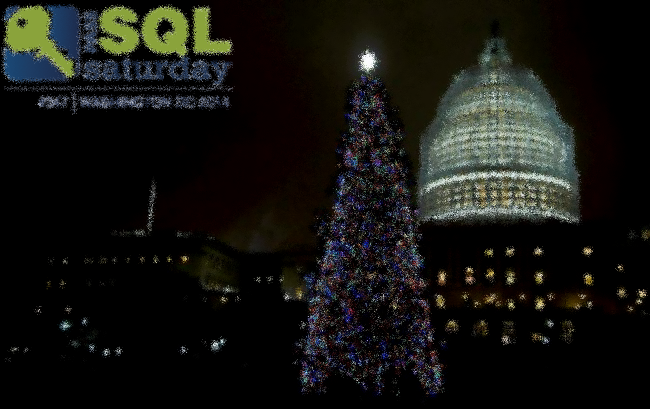 This past weekend I had the opportunity to go visit Washington DC.  It was just the second time I got to stay in the Nation’s capitol for more than just a few hours.  The previous opportunity came with last years event which I talked about here.  Sadly, my time was far too limited this trip and seeing the sites was far more limited.  Thus, I only saw them from the car or plane window in passing.  But that is far better than seeing them in photos or not at all.

The reason for the visit?  It was SQL Saturday 347.  Now, it is my chance to recap the event and what I learned.

This year I really wanted to attend to see some of my friends and to help some friends as well.  An example is that one friend was looking for some good constructive feedback to his presentation.  That friend happens to be a person I met at the event from last year: Ayman El-Ghazali (blog).  I had a good conversation with Ayman in the speaker room following his session and between some of the sessions.  Ayman is a DBA that is working hard to learn and improve any way he can.  Those are traits that are important to have as a DBA these days.

Much like last year (and I even made the comment), it was warm again (definitely shorts weather) and it also rained again.  I really think there must be a trend with SQL Saturday in DC in that it brings rain.  There may be something there.

The event was well organized.  I think that is mostly due to Gigi Bell (twitter).  She is the wife of Chris Bell (twitter) and she whipped those boys into shape. 😉

There were some things that couldn’t be controlled necessarily.  But everybody came together and helped to make it work.

I had the great opportunity this year to present the very very very short session on Murder that I give as a precon along with Wayne Sheffield.  People walked away from the session expressing gratitude for the content and how much they learned.  Many were even curious to learn more of what we could present in the all day version.  Very COOL!

I also had a great time seeing SQLFamily.  Talking with friends and enjoying everybody’s company.  I did make it to a few sessions outside of mine.  And I got to chat with attendees while trying to answer their questions in the halls.

I am looking forward to this event again next year.  And I hope everybody that attended my sessions learned at least one thing.

One last thing.  Thanks to all of the attendees.  To say “the attendees were great,” at this event, would be a gross mis-understatement in my opinion.  The attendees were awake and engaged (even if they had never heard of “Clue” before the session).  They invested their time and effort and I think they helped to make the event top notch.