No this is not New Kids on the Block (I think I just threw up in my mouth thinking that).

Let’s create a generic maintenance plan and see what happens.

In this box, we can type a name for this Maintenance Plan that is to be created.  I chose MaintPlanOwner, since that is the topic of this article. 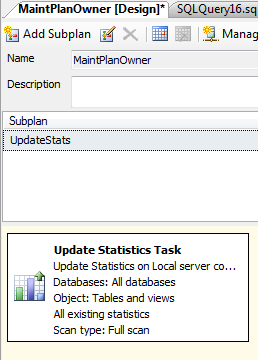 After clicking ok on this dialog box, you will be presented with a blank canvas with which to design your maintenance plan.  I have chose a simple task for the purposes of this article.

I will create a subplan named Statistics and add the Update Statistics task to the canvas.

You can see this illustrated to the left.  I chose to update the statistics on all databases and left all other options as the default option – for simplicity of this article.

At this point, the only thing left to do is to save this Maintenance Plan.  Once the plan is saved, then we can move on to the next step – some fun with TSQL.

This is the stage of the article where we get to play with TSQL and investigate at a high level the Maintenance Plan we just created.

Within the msdb database, we have some system tables that store information about SSIS packages, DTS packages, and Maintenance Plans.  We will be investigating from a SQL 2008 and SQL 2005 standpoint (it changed in 2005 and then again in 2008).

In SQL 2005, we can use the following to find that I am now the owner of that maintenance plan we just created.

For 2008, a slight modification yields the following query that returns the same results.

Notice that in both queries, I delve out in the sys.server_principals catalog view.  I did this to retrieve the name of the owner of the package that was found in the sysdtspackages90 and sysssispackages  tables respective to version of SQL Server.  These queries would yield the following result set for that new Maintenance Plan that was just created.

Let’s assume that this package is scheduled via a SQL Agent job on a production server.  I then get moved to a different department and no longer have permissions on this particular production server.  The job will start failing due to the principal not having access.  One fix would be to change the owner of the job.

Now if you run the code used earlier to investigate, you will find that the owner has indeed changed.  The results of that query should be similar to the following.

There you have it.  No more hair tugging over something as benign as the owner of a Maintenance Plan.  This is one of those things that should be looked at as soon as you inherit a new server.