Building your brand is not an overnight sensation. It does take a while and possibly a bit of luck here or there along the way. The one thing it always starts with is your name.

This topic is one that has been stewing for a while and finally this week it decided to boil over.

My first thought with this post was to write a rant. Instead, I want to try and turn it on its end and try to put a different spin on the problem. Yes – I said problem.

This started when I was setting up a piece of software (to demo to a client) for a vendor that I respect – A LOT. I noticed something peculiar about the software that was different than the documentation (and therefore expected result). I reached out to my contact at this company and he escalated a ticket to their support staff. After a few back and forth threads, my contact noticed something troubling – as had I. While I was going to set it aside but my contact was bothered by it too. The support personal started calling me by the wrong name.

Addressing somebody by the appropriate name or title is a pretty important topic. In this case, not only did they start addressing me by some other name, they had also lost sight of the existing relationship I had with this company as well as any previous information provided to them demonstrating level of expertise in the area of SQL Server or with the specific observation being reported. This is demonstrative of a lack of attention to detail – both in regards to the audience and the technical problem.

Your Name is Your Brand

If I throw a few names out there like Paul Randal, Steve Jones, Grant Fritchey or Brent Ozar, chances are you will know who those people are (given you are reading this blog post). These are people (like many other giants in SQL Server) that have built a brand based off their name. This is a good thing. You recognize the name and you recognize that they are very good at what they do.

Building your brand is not an overnight sensation. It does take a while and possibly a bit of luck here or there along the way. The one thing it always starts with is your name. This leads me to my next story. 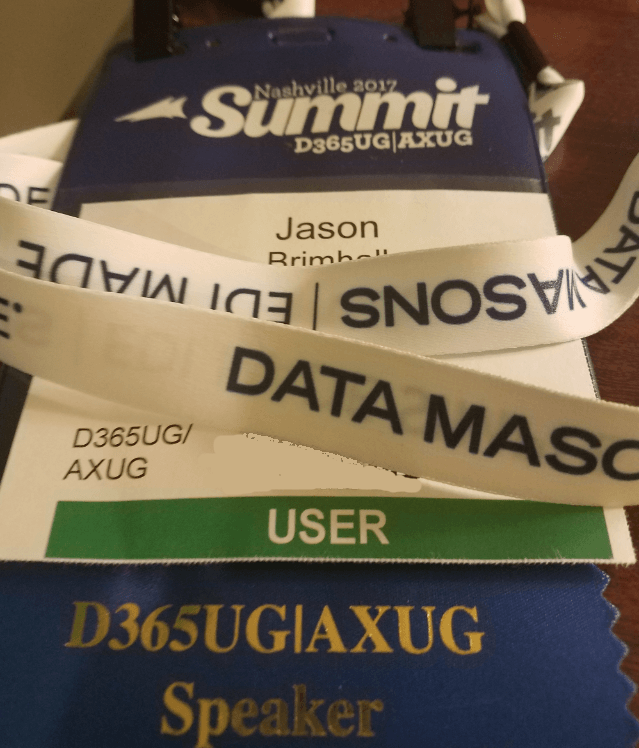 This week I have been at Summit. This is not the traditional DBA Summit hosted by PASS, rather this is related to Dynamics (AX, NAV, GP, CRM, 365). Just like most conferences, we all get a nice easy to read name badge.

Hopefully you can easily read that mine clearly says my name is “Jason”. Besides the name, there is a QR code on the badge. Otherwise, the name is large enough you can generally read it from afar.

While meandering through the Exhibitor Hall, I stopped at one particular booth that was raffling off an R2D2 that particular day (they also raffled off a C3P0 and a Yoda on other days). And yes it is very rare for me to stop at one of these raffles – but it was R2D2.

As I was stopped to fill out the form for the raffle, I was approached by an eager booth dude. “Hey Larry, how’s it going?” he said. He was obviously talking to me, so I turned to him and said “Jason” while showing him the name on my badge. Not even 30 seconds later he did it again “So, Larry…”. At the sound of that, I had to cut him off and correct him again and reminded him I had just told him my correct name and even showed it to him via the badge. At this point I abandoned the R2 raffle and told him I was no longer interested.

This was coming from a vendor that was more than likely hoping to try and pitch their software. A lack of attention to the audience at hand just cost him a lead (albeit small compared to the number they gained). Now, that vendor has to worry about the word of mouth that may come from their lack of attention and focus.

Now, my name is pretty important to me. It may not be as important to you – but it is to me. Similarly, your name should be extremely important to you. You and I are all working at a similar task – building our own brand based on our names.

I am sure both of these vendors I have illustrated are also keen on building the brand around the corporate name they have established. Brand and name are recognizable. Now, put yourself in either of these two scenarios I have just described. Have you ever made a mistake with somebody else’s brand? Or, have you ever been on the receiving end of this kind of mistake? Suddenly the world is spinning a slightly different direction, right?

I won’t divulge the names of either vendor in this case (partly because I still have a good relationship with the one and I have already forgotten the name of the second), but think about this: What do you do for your brand when somebody steps on it? How we react (and granted I probably could have taken a higher road in the second case by gently reminding the vendor yet again what my name was) can do quite a bit for building a brand. It’s not always about what you know, but also about how you conduct yourself towards and around others.

3 thoughts on “Your Name is Your Brand”