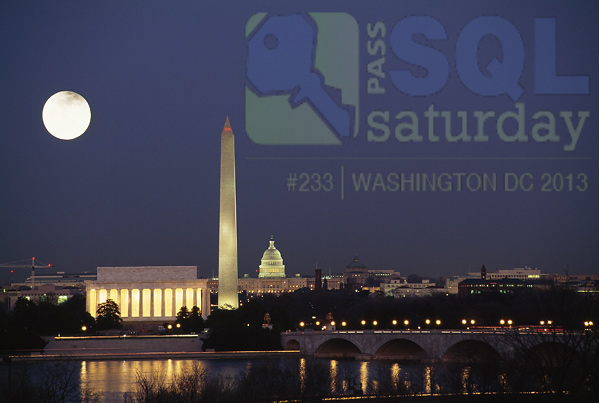 This past weekend I had the opportunity to go visit Washington DC.  It was the first time I got to stay in the Nation’s capitol for more than just a few hours.  It is also the first time that I was able to see any of the monuments in the capitol area.  Granted, I only saw them from the car or plane window in passing.  But that is far better than seeing them in photos or not at all.

The reason for the visit?  It was SQL Saturday 233.  I had written a little about the opportunity here, as it approached.  Now, I have the chance to recap the event and what I learned.

Some articles have already been written at the time of this writing.  One article that I want to mention is by Ayman El-Ghazali (blog) that you can read here.  I had a good conversation with Ayman in the speaker room in between some of the sessions.  Ayman struck me as a very humble and appreciative person.  Those are traits that are important to have as a DBA these days.  Then to read the blog post by Ayman, it was refreshing to see those same traits echoed in his writing.  Check it out and give him a shout out.

Something that I found funny throughout the few days I was in town was the repeated looks and comments by the locals.  I wear shorts just about as frequently as I can.  The morning before I left to head to DC, the local temperature had warmed to -2 by late morning.  The day of this writing, I saw the local temperature at -8 in the morning (8 am) and -4 at 6 pm.  Just a couple days before those temperatures, the temperatures were well north of 50.  The temperatures in DC were in the 40’s and 50’s and it really felt more like 70’s and 80’s for me.

You can imagine the comments about the shorts and me thinking it was Vegas or something like that.  Well, it did feel rather warm – almost tropical.  But, since the locals were bundled in parkas, using umbrellas and generally bundled from head to toe (for the rather warm weather), I decided I needed to provide a frosty perspective on the SQL Saturday event / weekend. 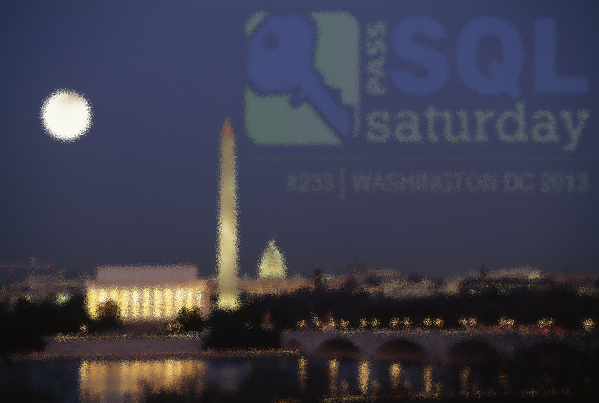 That should help you feel chilly now that the photo is “iced” over.

Despite the weather or the pending doom and gloom of the weather (which is still happening with the ice storms), the event was great.  The event was well organized.  I think that is mostly due to Gigi Bell (twitter).  She is the wife of Chris Bell (twitter) and she whipped those boys into shape. 😉

There were some things that couldn’t be controlled necessarily.  But everybody came together and helped to make it work.  We had a couple of cancellations.  I was lucky enough to get an opportunity to present a second session thanks to one of these cancellations.  I enjoyed presenting to packed rooms and I enjoyed the feedback.  One comment came back saying “I learned so much more than I expected.”  That is GREAT!

I also had a great time seeing SQLFamily.  Talking with friends and enjoying everybody’s company.  I did make it to a few sessions outside of mine.  I took great pride in harassing Robert Pearl.  I learned some soft skills from Alan Hirt.  And I got to chat with attendees while trying to answer their questions in the halls.

I am looking forward to this event again next year.  And I hope everybody that attended my sessions learned at least one thing.

One last thing.  Thanks to all of the attendees.  To say “the attendees were great,” at this event, would be a gross mis-understatement in my opinion.  The attendees were awake and engaged.  They invested their time and effort and I think they helped to make the event top notch.

One thought on “DC SQLSat”